Hallmark Floors takes pride in the fact that from our inception, indoor air quality has been a very high priority. Our manufacturing process is closely monitored and third party certified. We pride ourselves as being a cutting edge company when it comes to having obtained world class, low-formaldehyde emissions. In fact, Hallmark has been producing product that met the TSCA Title VI Compliant standards in 2008, a year prior to the CARB I standard and three years prior to the TSCA Title VI Compliant standards being developed and implemented.

OSHA – the US Occupational Safety and Health Administration guidelines allowed for more emissions than were permitted in Europe and Japan. Hallmark felt the most responsible thing to do for our customers was to emulate the more stringent international standards, E-0.

On January 1, 2009 the State of California (California Air Resource Board) implemented the CARB I standard of 0.08ppm (parts per million emission) for engineered hardwood flooring and hardwood plywood.

On January 1, 2011 TSCA Title VI Compliant was fully implemented at a maximum emission rate of 0.05ppm, which is lower than the International Standard E-0. TSCA Title VI Compliant is 15.5 times lower than the federal guidelines as determined by OSHA (0.775). TSCA Title VI Compliant is much closer to the rate of normal air quality ranging from 0.03ppm to 0.08ppm. Formaldehyde at these levels is naturally occurring, with higher levels typically in urban areas. To be completely Formaldehyde free is impossible given that plant matter naturally contains these trace amounts. The real point of CARB II is to ensure that engineered wood products are not pushing levels past the acceptable standards of nature. 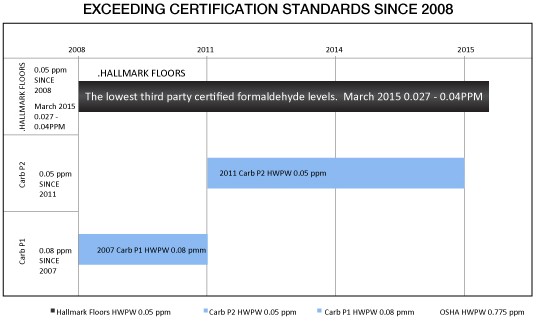 Specifically what is CARB II?

How do I know my floor is safe?

You can check with your local supplier and find out what a companies policy is as to their compliance with the TSCA Title VI standards. All flooring sold in California is legally obligated to follow such standards. Though it is expected to become a nationwide standard in 2015, no other state in the United States is legally obligated to follow the TSCA Title VI standards. There is also formaldehyde-testing kits that are available for purchase online through Amazon.com.

Is there a national law in place to guard against using harmful chemicals?

As of today, there is no national law in place against these chemical emissions. In the United States, only California has the law of CARB II emission control laws. If someone bought flooring today from any other state, a company could sell that person a product with as much formaldehyde as they wanted. However, the United States is expected to adopt the laws made by California to make the rest of the nation TSCA Title VI compliant. This law is expected to become nationally recognized by 2015.

What has the flooring industry done to reduce formaldehyde in plywood products?

Fortunately, acceptable formaldehyde emission levels from wood panel products are continuously dropping. Some reasons for these levels to be lowered are public awareness, which creates a greater demand for non-hazardous products, as well as things such as government regulations. The International Agency for Research on Cancer, and the National Toxicology Program now recognize formaldehyde as a carcinogen. This has made the public more concerned on the topic, and has also gotten reactions by worker and consumer associations, environmental organizations, authorities, and the industry itself. Generally, all flooring manufactured in North America abides by the American National Standard for Particleboard (ANSI A208.1). This is the voluntary standard. In North America, the allowed formaldehyde emission levels are 0.20 ppm for particleboard. Flooring that is manufactured in Europe abides by the European E1 standard, which is 0.14 ppm. Flooring that is manufactured in Asia and imported to North America abide by the European E2 standard, which is 0.32 ppm. On April 26, 2007, the California Air Resources Board (CARB) approved an airborne toxic control measure. This control measure reduced acceptable formaldehyde emissions from hardwood plywood (HWPW), particleboard (PB), and medium density fiberboard (MDF). The CARB standard is for indoor products in the state of California, but will be the standard for the rest of North America, and is recognized around the world. The CARB rule was put into place in two phases. CARB I was implemented January 1, 2009. These standards for the allowed formaldehyde emissions were 0.08 ppm for HWPW, 0.18 ppm for PB, and 0.21 ppm for MDF. Two years after CARB I was introduced, CARB II was set and allowed emission levels were lowered. The new standards were set at 0.05 ppm for HWPW, 0.09 ppm for PB, and 0.11 ppm for MDF. CARB II is the law for formaldehyde emissions in California, but has yet to be implemented across the rest of the United States. The rest of the country is expected to abide by the CARB II standards in 2015.

What has Hallmark Floors done to reduce formaldehyde?

Hallmark Floors has taken pride since the beginning of development to make sure all areas of production are closely monitored and in compliance with the CARB II standard. Hallmark Floors makes their glues in Japan, which was the first country to set formaldehyde standards. Hallmark Floors has actually been CARB II compliant years before the standard was put in place. Hallmark Floors has always believed in not only creating a quality product, but also an environmentally responsible product. Another way that Hallmark Floors ensures a reduction in the use of formaldehyde in their products is the exclusive use of hardwood plywood (HWPW). With maximum emission levels being at 0.05 ppm for HWPW, it is the lowest amount of formaldehyde emission allowed according to the CARB II standard. HWPW also requires the least amount of glue when being produced, so not only are the emission levels incredible low, but the amount of glue itself is lower than other composite woods. 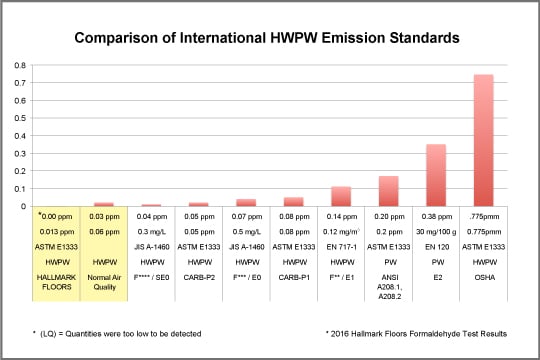 Is my Hallmark floor safe?

Yes! Hallmark has been TSCA Title VI compliant years before the CARB II standard was put into place in 2011. Hallmark Floors has been proactive in making a great product safe for its users.

Can an adhesive remover be used to remove adhesive residue from a subfloor prior to installing a new floor?

No. Many adhesive removers contain solvents that would leave a residue on the surface of the subfloor. This residue can react negatively with the new adhesive and bleed through the new floor covering.

Why do companies use formaldehyde at all if it is a human carcinogen?

The properties in formaldehyde are exceptional and are not easily replaceable. Replacing formaldehyde also makes a product more expensive to produce, which will drive up costs not only for production, but also for a potential end user.

No. Any existing resilient flooring must be removed before any new flooring is installed.

Does my Hallmark floor have formaldehyde in it?

We are Carb II compliant. Formaldehyde exists naturally in many plant fibers. Formaldehyde has been found to be an excellent binding agent in the glues that hold the different layers of plywood, fiber type panels, strand board and engineered hardwood floors together. Low-emitting glue systems are formulated to encapsulate the formaldehyde to reduce the emissions they may give off. CARB II requires that formaldehyde emissions are reduced to a level more compatible with what would be found in natural outdoor air.

Would Hallmark Floors affect my allergies?

When using Hallmark Floors, a person is no more susceptible to allergic reactions than any other floor. The levels of formaldehyde in Hallmark’s products are so low that it is not possible to get a reaction from the formaldehyde content itself. It is easier to argue that someone’s allergic responses would be lower if they had Hallmark Floors installed in their home. A hard surface is always better for someone’s allergies than other floors such as carpet. Carpet soaks in dust particles, pollen, and other allergens that can become stuck into the fibers, while a hardwood or luxury vinyl keep these allergens on top of the floor, which are easily cleaned from the surface.

How else does Hallmark Floors protect its customers?

Hallmark Floors has five collections of luxury vinyl that use Nano control technology in their finish. The anti-microbial characteristics of this finish make the finish kill viruses and bacteria as they come in contact with the floor’s surface. The titanium dioxide additive in the finish reacts to light, which makes this possible without the use of harsh chemicals.